WELCOME TO THE ARTFOLIO OF LOUIS LAMBERT (3TTMAN)

The Vernacular and the Venerated: On Louis Lambert

Why the arts and crafts were ever separated is a question too vast to discuss here. Yet it is a question which the artist Louis Lambert interrogates – both visually and materially, both publicly and institutionally – throughout his entire practice. Blurring the boundaries between the so-called highbrow and the low, between the vernacular and the venerated, he refuses to stand by the demarcations set by the art world, to ascribe to the either/or. Whether employing the basest of materials (the concrete which is becoming a recurring theme in his work for example), or the humblest of themes (the popular or everyday, the traditional or folkloric), Lambert always attempts to reposition them, to adjust the framework within which they sit. He employs his three-headed alter-ego (his trois-têtes man) to offer all options and all possibilities. He uses his tripartite perspective to not proclaim but to suggest, to reveal complexity in his always hopeful, mirthful, uninhibited style.

CHECK OUT THE LATEST WORK 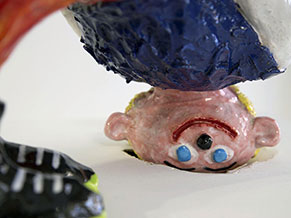 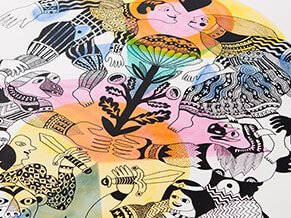 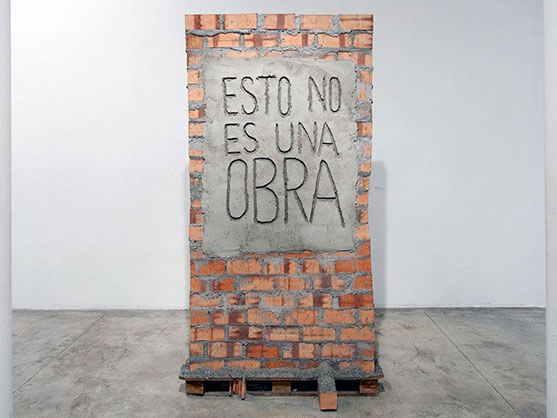 film is the message 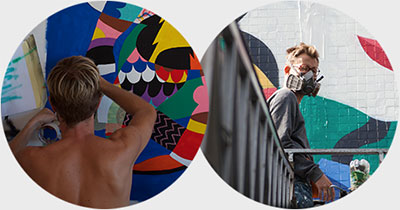 Louis Lambert is 3TTMAN, or to aid in its proper pronunciation, Trois Têtes Man, the agitador de medio ambiente. As a key presence in the contemporary urban art scene in Madrid, he has formed an aesthetic combining the punk heritage of graffiti, its do-it-yourself, by any means necessary attitude, with a style showing a strong influence of both vernacular, and popular religious art. Working on a plethora of surfaces (from billposters to self-laid concrete), and utilising a myriad of techniques (from ceramics to mosaics), Lambert’s production purposefully blurs the boundary between art and craft, challenging prevailing conceptions of ‘correct’ practice in both the fine and public-art worlds.

Born in Lille, France, Louis Lambert painted constantly throughout his early years without ever feeling the urge to move his work into the streets, feeling that without a truly distinctive approach, his movement into that arena would be be frivolous. Whist he experimented a little with stickers and posters alongside his childhood friend Remed by 1999 he found what he considered a more expansive way of bringing art to the public; co-founding the label 102% – a “pop shop” style brand focussed on unique, one-off, hand-printed clothing – he directed his artistic skills through textiles, still tentatively continuing to work in the street. It was Nano4814’s City-Lights project of 2004, that gave him the inspiration to fully shift his practice into this context however, he encountering a project which, for the first time, demonstrated the enormous potentiality of the urban environment. At first working purely on street-furniture – post boxes, lampposts, rubbish containers and the like – Louis Lambert would détourner these objects, enlivening and animating them with comedic, often grotesque imagery. Yet whilst these early works gave him a taste for the action, a taste of the possibilities of the street, he still felt he had yet to find a project which he could wholeheartedly embrace.

The billposters changed all that however. Whilst unwilling to work directly on the city’s walls, and equally unhappy with the limited room available to really experiment on street-furniture, 3TTMan came to realise the huge amount of space taken up by billposters in Madrid, a seemingly semi-legal form of advertising which consumed nearly every single vacant or neglected structure in the city. Not only did they provide a readymade surface which to work on in the very heart of the capital however, the billposters also presented him with a readymade response to any encounter with police: If the billposters themselves were an illegal form of visual culture, how could painting on top of them be considered illegal in itself? Lambert would thus openly paint on these surfaces in the middle of the day in some of the most conspicuous sites in the city, happy to argue with the police when they eventually emerged on the scene (as they invariably would). This approach thus gave him the time to produce highly complex collages on these sites, never simply painting on top of the posters but using what was already there, playing with it, challenging it, taking a purely commercial medium and converting it into a space for interaction, for enjoyment.

Whilst still continuing his work on billposters (as well as the canvas-based work which he has never ceased producing), Louis Lambert has since found numerous other way of interacting in the street, producing large-scale murals, mosaics, piñatas, pushing upon the strained boundary between folk and high-art. His recent focus has been on cement however, probably the most seemingly un-artistic of tools. Inspired both by the spontaneous writings left upon unset concrete in the street, as well as the experience of re-building his studio in Madrid, 3TTMan, armed with some bags of sand, cement, and plenty of water, has begun to reform the city streets, working both on the potholed pavements (which have been left dangerously unrepaired) and bricked-up shopfronts (of abandoned or empty buildings) that, like the billposters, seem to proliferate widely in the city. Laying cement onto these sites then, he incises both texts and illustrations upon them before it has the chance to set (sometimes also painting on top of these designs), often with paradoxical or word-playing statements: Esto Es Graffiti (“This is Graffiti”) or No Me Gusta Escribir En Las Paredes (“I Don’t Like to Write on Walls”) for example. Like his exploration of ceramics in Vietnam, his Indian ‘wildstyle’ or street-based painting-by-numbers, the concrete projects can thus be understood to fuse three of the key themes within his work; his obsession with popular aesthetics; his desire to critique the sanctity of art; and his focus on representing the contradictions, the multiple points of view that can be taken in any situation. Like his three headed character itself then, a creature which suggests the multiple possibilities of every situation, Louis Lambert aims to present us with a method of questioning rather than judging, with works meant to function through revelation rather than explanation. Expressing the inherent imbalance of the three, he brings a witty, joyful spirit to the street, a low-brow, popular yet highly refined technique, one refusing to stand by the demarcations which the art-world sets up.

From the The World Atlas of Street Art and Graffiti by Rafael Schacter.

Contact me through here if you are interested in purchasing art pieces or for any other matter. You can also mail me at louis.lambert@3ttman.com
/!\ error getUserIDFromUserName. /!\ error empty username or access token.